99 turns. 999 steps. One mountain.
WATCH THE FILM
BUILD YOUR OWN

Tianmen Mountain Road in the Hunan Province of China incorporates a dizzying 99 hairpin bends along the 11.3km of mountainside road. At the summit, this road leads towards 999 steps, all of which lead to Heaven’s Gate, a natural rock arch in the mountainside, mythically thought to be a link between the mortal world and the world of the gods.

Reaching Heaven’s Gate is no mean feat. The demanding road that leads up the mountain towards this spectacle is so formidable that there is no room for error. After the road comes the steps, which at their steepest sit at a towering 45-degree angle. While the drive up the 11.3km of winding road has been previously tackled, no vehicle has ever taken on the immense task of driving both the road and the 999 steps all the way to the summit, until now. 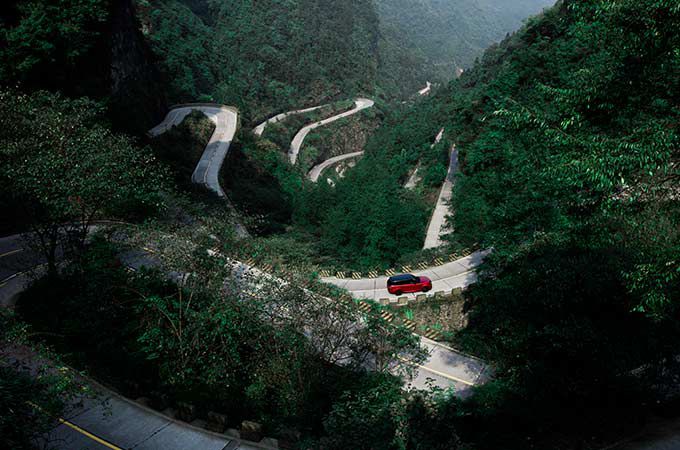 Reaching the top requires a vehicle with performance and capability in equal measure, and what better place than the epic Tianman Mountain Road to demonstrate the power of New Range Rover Sport. Behind the wheel, and ready to take on the challenge, is Ho-Pin Tung, Le Mans 24 Hour Winner and driver for Jaguar Formula E Racing.

It is time to see how New Range Rover Sport fairs in this world-first challenge, testing its performance and capability, while pushing the boundaries of off-road driving to new heights.

The journey started with a test in the UK, where Ho-Pin joined the team at Jaguar Land Rover’s testing facility. After some calculations and consideration, the team began tackling a specially-built test model of the 45-degree angle steps that were waiting for them in China. Not all aspects of the challenge could be tested, and doubts remained around the successful completion of the task.

Despite the enormity of the challenge that lay ahead, the team set out to China and the day was soon upon them. It was time to take on the Dragon Challenge.

The first section conquered by the New Range Rover Sport was the epic mountain road which is usually only used by ECO buses with drivers who are specially trained for its 99 hairpin bends. 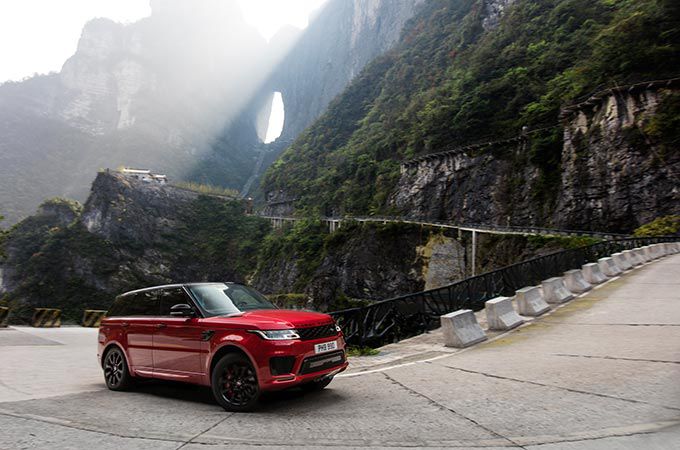 Each hairpin bend was a trial of skill and capability, but the superior handling, boosted by the Terrain Response 2 system, saw New Range Rover Sport manoeuvre through all 99 bends with ease.

New Range Rover Sport with its 5 litre SC engine, which gives it 525 horsepower provides, superior dynamic characteristics, making it the perfect vehicle to confidently handle the mountainside road in this initial stretch of the challenge.

Once the slalom of turns was negotiated, the SUV carefully navigated the lowest set of steps, bringing it to the final leg of the challenge: an extreme off-road climb up the 999 steps. 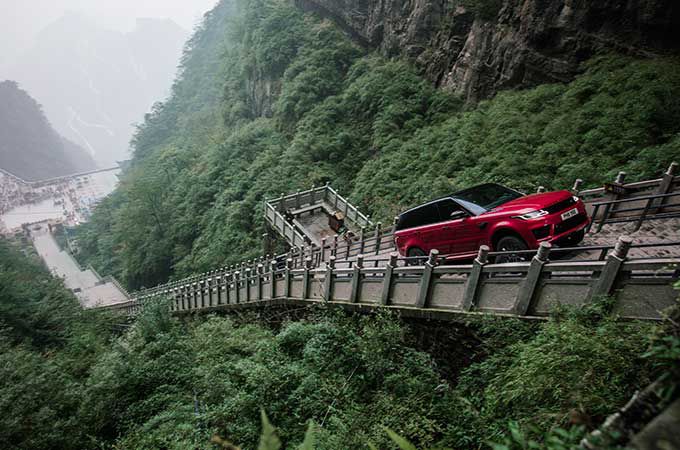 Switching to Mud and Ruts mode and using its off-road capability, the vehicle launched into action. Capitalising on its renowned power, New Range Rover Sport began the world’s first attempt to reach the summit of the steps by car.

Disappearing into the fog surrounding the mountains during its final ascent, New Range Rover Sport successfully emerged at the top after a powerful climb up the steps. 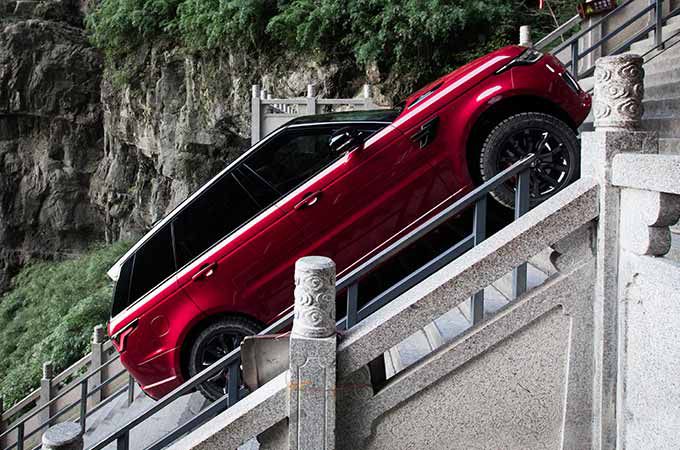 The SUV completed the previously un-attempted drive that included 99 bends, 999 steps and the slow maneuvering at the bottom of the steps in an impressive 21 minutes and 47 seconds. At the finish line, the Range Rover Sport Dragon Challenge team celebrated with a shared sense of accomplishment and relief at the successful completion of the latest in the series of Driven Challenges.

In a combination of true capability, the unwavering power of Range Rover Sport and the skill of the driver, the team successfully completed this monumental challenge.

It was the true power and performance of New Range Rover Sport that allowed the team to conquer The Dragon Challenge, making it the world’s first vehicle to successfully complete the 99 turns and 999 steps of Tianmen Mountain.

EXPLORE THE VEHICLE THAT TOOK ON THE DRAGON CHALLENGE AND WON. Explore the vehicle that conquered the twists and turns of the Dragon Challenge and discover the true power of Range Rover Sport.
EXPLORE THIS VEHICLE THE THRILL OF THE DRIVE

Go beyond your daily drive with a Land Rover Experience day. Get behind the wheel and learn from professionals as you navigate off-road obstacles in the comfort of a Land Rover.
BOOK AN EXPERIENCE DAY Discover the design accents and powertrain options available in the configurator.
BUILD YOUR OWN